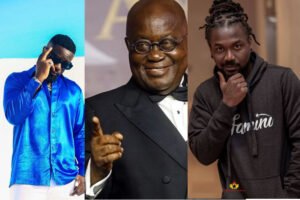 Samini and Sarkodie were paid GHC 500k to endorse Akufo-Addo – Sam George. Member of Parliament(MP) for Ningo-Prampram Sam Nartey George has alleged that some celebrities who have started endorsing the New Patriotic Party (NPP) were paid to do so.

According to him, they were paid GHS 500,000 each and therefore people should not be swayed by their endorsement of the NPP.

He indicated that although there is love for their music and craft, their political choices cannot be trusted because they are induced with money.

Sam George said “Don’t be swayed by any funny endorsements people. We may love their music and groove to it but we don’t trust their political choices especially when they are worth GH500,000”.

Sarkodie and Samini are the latest to endorse the President’s second term bid with their music.

To Sarkodie, if he continues to enjoy stable power and also his family enjoys free SHS, then Nana Akufo-Addo needs four more to do more.

Samini has also released “kpoyaka” to praise Akufo-Addo’s achievement across all sectors of the economy.