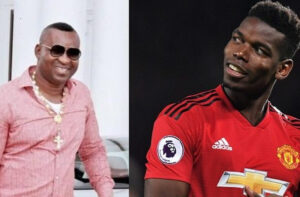 Chairman Wontumi vows to buy Paul Pogba for Asante Kɔtɔkɔ. Paul Pogba could swap the red jersey of Manchester United for Kumasi Asante Kotoko if Chairman Wontumi’s dream of signing him for the club comes to fruition.

Manchester United have this morning been reported to be interested in selling Paul Pogba who has had a hot and cold affair at Old Trafford.

His ‘stupid’ mistake that gave Arsenal their first win at Manchester United’s home in fourteen years is said to be the final straw and United who bought him for £89.3 million from Juventus are willing to cash-in on him.

United it is understood will listen to offers around £53m and Wontumi is ready to buy him for Kotoko.

He noted that signing Pogba for Kotoko will bring the world’s attention to the club.

“I believe in Nana Yaw Amponsah. I think that guy has vision to help Ghana’s football so I have asked them to go to Manchester United to trigger the release clause of Paul Pogba… You know day in day out his price comes down and now I learnt it’s around £53M. I will pay”.

“I want to bring him to Kumasi Asante Kotoko SC and tell the world that there’s a club in Ghana bigger than Manchester United.”

“There’s a business aspect that you haven’t seen but I will make returns through the sale of his jerseys and others so paying his weekly wages would not be a problem at all”, he added.

He also discussed the possible benefit he could earn from the deal as a businessman.

Kotoko signed nine players in the Ghana Premier League transfer window and will be competing in the CAF Champions League.